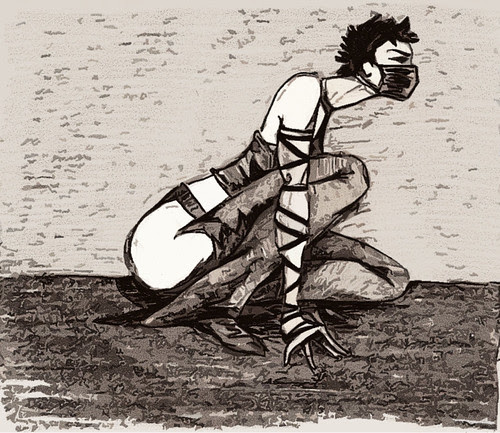 A little bit about Guilt Girl's costume; she likes (skanky?) black leather (but money is tight so her costume is usually a second-hand, sales-rack, pieced-together, self-altered affair) and she wears a surgical mask (the easiest cheapest identity-obscuring thing available to her).

And she wears a black strap wrapped around her left arm.

A little about that black strap...

I've always thought that a black strap wound around one's arm would just be a cool touch to a costume, so obviously Guilt Girl would wear something like that just for the design appeal (in spite of money problems, she does like a bit of flair.)

Then, I'm working on a character who lives in a phylactery. When I finally got around to doing some research on phylacteries (or tefillin) I was enthralled and amazed to see what they look like when worn. The feminist in me was delighted to see the gender aspect of this ritual dress addressed by Barbie and even Rosie the Riveter.

So I am toying with the idea of her little black strappy costume thingy having a strong aspect of tefillin to it.

But I'm not Jewish, and I don't think Guilt Girl will be either. So... working on it. And hoping it won't be perceived as too offending to any members of the Jewish community who might happen across her.
Posted by galen dara at 3:37 PM 5 comments:

I miss my size.005 micron pen. It went dry two weeks ago and the little craft store where I usually buy them has not restocked them in some time (I've check three times since it went dry.) I got a set of Faber-Castell art pens that have been an okay replacement- I especially like the brush tipped pen. But they just doesn't measure to the micron. They bleed. And leave streaks. And most importantly, the smallest size is nowhere near the pinpoint thin .005 that I covet.
Desperate, I finally went online to see what I could buy and found a place where the micron pens were nice and cheap. Of course, with shipping costs it all evens out to what I get them for in-store anyways. At least i think it all evens out. I haven't done the math. I hate math. Anyhow, now everyday I await the mailman, itching for my pens to arrive. But so far I have had to just make do with those Faber-Castell's.
Posted by galen dara at 10:46 AM No comments:

I got a kick out of Loeb's and Sale's Catwomen, When in Rome. But it also got me thinking, "ah yes... yet again, a comic written by men for men with the superheroine as male fantasy pin-up."
Here's the thing. I like sexy. And I like sex.
But how to get around the whole male-gaze thing in the male dominated field of Comics.
Anyhoo... I 've been enjoying Johanna Draper Carlson's list of comics by women. Also Feminist Allies has some interesting insights into comics and the gendered messages therein.

And I just have to admit my love for a gal who's alter ego dresses in costume and fights bad guys (Or makes mischief. Or carries a sword. Whatever.)

Posted by galen dara at 2:30 PM No comments:

My right hand is sore. The muscles between my thumb and index finger. An area that used to be rock solid from daily sketching... it has long since fallen in to lazy softness. This week (after a good conversation with my cuz) I have determined to rectify that. Lazy and uninspired and stuck for too long, I have set the goal to draw for at least two hours a day. Initially I was only thinking of getting the creative pathways in my brain working again (they have become very image poor lately) but the soreness in my hand is indication that my brain is not the only thing that has gotten soft.

And so...
To refill my empty pool of inspiration,
and to rebuild my artistic brainwaves,
and to strengthen the adductor and flexor muscles between my right thumb and forefinger,
I am doing daily studies of Christian Icons, Comicbook characters and Childrens book illustrators (etc...) 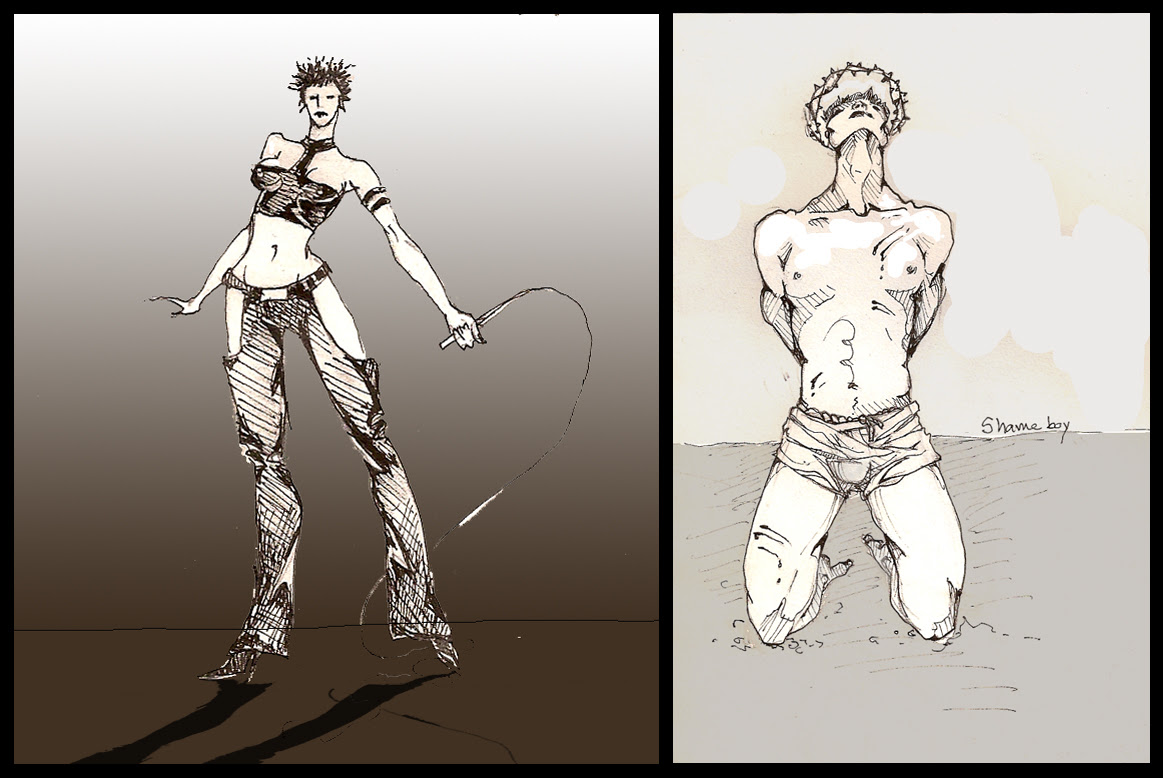