Tomorrow I get on a plane for Dallas Texas to hang out with some lovely people: ConDFW XIV has asked me to be their artist Guest of Honor! (so very very honored.)
First, a bit of art the event:
Next, the program!  Here's a link to all the various ways of seeing what's going down and here's my specific schedule:

FRIDAY, 3pm: All I Got Was This Lousy T-Shirt (JEFFERSON)
Panelists: Adrian Simmons (M), Galen Dara, JD Horn, Teresa Patterson, Julia S. Mandala
So many books and stories have travel as a primary activity. However, how many people know anything about travel except by car or plane? Has anyone sailed around the horn in a catamaran? Rode a motorcycle from Canada to Mexico? Hitchhiked your way across the USA? We look to our panelists to tell us some unique stories about unique places and ways to travel.

SATURDAY, 1pm: A Modern Ghost Story (JEFFERSON)
Panelists: Galen Dara
Inspiration for a horror story can come from many places. A single building, a haunted wood, or even an abandoned railyard can provide quite a setting. Our Artist Guest of Honor tends to specialize in creating haunting images, and relates how and where she gets such inspiration.

SATURDAY, 2pm: Digital Versus Traditional Art: Pros and Cons (ART SHOW)
Panelists: Galen Dara, Rocky Kelley, Brad Foster, Teddy Harvia, Melia Dawn
Always a tricky subject, the arguments for and against digital art have always been legion. With Photoshop replicating time honored techniques in the blink of an eye, is there still a place for traditional art? Our artists weigh in on the pros and cons of both, and where both of these forms of artwork fit in today’s society.


SATURDAY, 5pm: The mARTian Collaboration (ART SHOW)
Panelists: Galen Dara, Rocky Kelley, Brad Foster, Teddy Harvia, Mel White, Melia Dawn
They say if you ask a committee to design a horse, you’ll get a camel. Come see what happens when we team up artists and ask them to design a Martian, alien, or whatever the audience demands!

SUNDAY, 12pm: Fandom Pictionary (ART SHOW)
Panelists: Galen Dara, Brad Foster, Teddy Harvia, Mel White, Melia Dawn
Play Pictionary or just watch as our artists compete. Come and see our artists face off against each other. Pictionary has never been this much fun!

Posted by galen dara at 2:02 PM No comments:

first... a little about WHY Lynn Thomas and Michael Damian Thomas are hurling space unicorns everywhere....

" As one bright woman in the letter column opined, even mythical creatures in space need to hang out with other friends on occasion to swap and discuss great stories. Uncanny readers began referring to themselves as members of the Space Unicorn Rangers Corps, reflecting the inclusivity and originality of perspectives inherent in its readership." ~read more

Here's the table of contents for issue 1, and now.... COVER REVEAL! 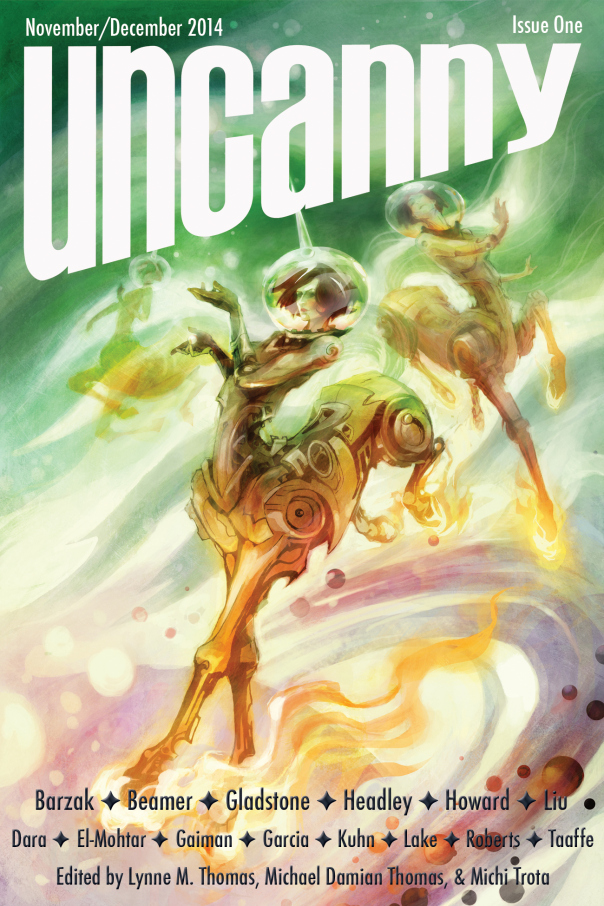 Posted by galen dara at 5:32 PM No comments:

It was my extreme honor to gather a few of the most amazing brains in SF/F illustrating, and ask them a few questions about being a women in the field today.  I give you the Women In Fantasy Roundtable discussion with Julie Bell, Irene Gallo, Rebecca Guay, Lauren Panepinto, Zoe Robinson, Julie Bell, and Elizabeth Leggett.  A powerful line of of highly influential art directors and award winning artists.

"There’s been a lot of talk about gender parity in the SF illustrating field, about how few women, percentage-wise, are working as illustrators—especially since at least half of art students are female. Did your gender ever come into play in your careers? What are your thoughts about what causes this attrition?

Panepinto: These are definitely conversations Irene and I have had before, trying to think of all the female names, who’s working and who’s not, and it seems like there are so many female students that are into it right now, but then where are the working artists?

Robinson: I think it’s just recently that it hasn’t been just the hardheaded girls toughing it out. It’s been very recently that generally, girls are aware that this is something that they’re invited and allowed to do.

Panepinto: I think that it also comes out of the YA fiction. Harry Potter’s got such strong characters—Hermione’s such a great female character—and The Hunger Games.

Dillon: I’ve done most of my work online, working by myself at home, so it’s difficult to gauge sometimes if gender has come into play in terms of my career path. Early on, it felt pretty isolating not seeing many other women in the big art forums at the time, but there have been more and more women becoming more visible in the field over the years...." ~read more

Posted by galen dara at 4:21 PM No comments:

a darkly bit of lovely that Mercedes M. Yardley got me tangled in.  Here's the cover art for her new novel, Pretty Little Dead Things: 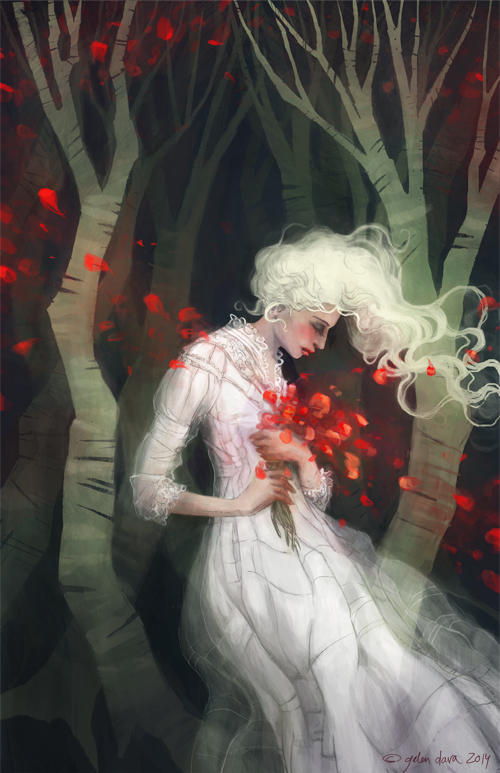 Posted by galen dara at 4:04 PM No comments:

illustration for Undermarket Data, written by An Owomoyela

"The white flag, stained grey from rain and city grime, called him halfway up a block of flats to a job. People like him didn’t have territories, but this—inconvenient from the streets and rooftops both—was as close as it came to his: the space where it was easier for those who preferred to move in three dimensions than two." ~Undermarket Data, written by An Owomoyela

1) The kickstarter for Uncanny Magazine just went live with announcments about who some of the cover artists will be:


2) I'll be joining a great lineup to do some internal art for Shadows Over Main Street, a forthcoming Lovecraftian anthology: