My good friend Wendy N. Wagner wrote a novel about vikings and cannibals and humans-turned-skinwalkers, full of bloody battles and gore and adventure and suspense. It stars a whole line up of smart tough women but most especially it stars Jendara; badass-reformed-pirate-mother wielding battle axes in her tattooed hands. (And if you happen to have the book, turn to the acknowledgment page because OMG JENDARA IS NAMED FOR ME, which makes me want to gleefully raid the tool shed for weapons on a daily basis.)

Anyhow, yes. Jendara is amazing. (And cover artist Michal Ivan did a brilliant job bringing her to battle-lust-filled life)  But lo, the story's antagonist; The Crow Witch. Creepy, damaged, filled with bad history and dark magic, wearing a headdress of decaying crow corpses. And I knew I needed to draw her.

So, with Wendy's permission, here she is: 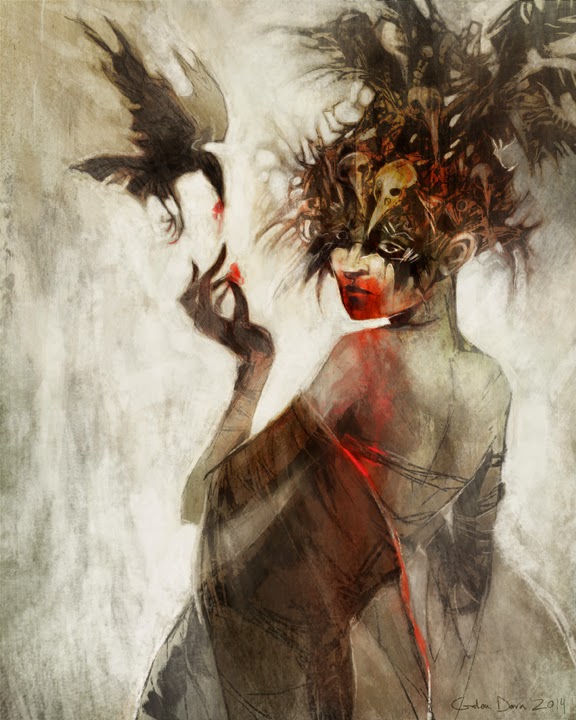 She's part of the shipment I just mailed off to the World Horror Con Art show in Portland next month. 8x10 reproductions of her will be in the print shop if you happen to be in attendance and would like to take a bit of dark and creepy home with you.

Here is what I'll have printed up large to hang in the Art Show itself: 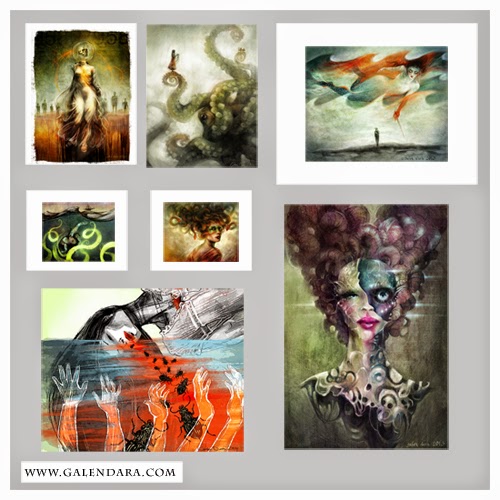 Tentacles and bones and blood and dark water. Stuff like that. I wish I could be at World Horror Con, but this year it happened to fall on the same weekend as Spectrum Fantastic Art Live and after much debate that is ultimately where I decided to land.

Hugs and kisses to my lovelies in the PNW.
(Especially you, Wendy! Thanks for all the inspiration!)
Posted by galen dara at 10:17 PM No comments:

Finally got around to the local life drawing session again, this time armed with a palomino blackwing 602 that Inkgorilla gave me. Holy Smokes, that pencil is the bees knees. Just ordered a whole box, and I have a goal of scritch-scratching my way through them all before summer is over. Oh how I miss the feel of some mark-making implement vibrating down my fingertips to a toothy paper. My drawing tablet, for all it's wonder and wow, just doesn't replicate that.

Well, enough of that. Here's a quick glimpse of that life drawing session (NSFW), all hodge podged together:


Mary Robinette Kowal put up a great post yesterday about the Hugo voting process, why certain books (creators, etc), get nominated and how she could have easily gotten one of her erotica short stories on the ballot. Mary is brilliant creator and just a delightful person and the post gives insight into the Hugo voting process as well as her integrity as a writer.

This part, on merit, personal preference, and  popularity in the Hugo voting process resonated with me:

If a lot of people thought it was good, then it’s popular. And if there are a lot of people who enjoyed a work you didn’t like then… yep. It’s going to wind up on the Hugo ballot, because that reflects the popular vote. And you know what?


As a relative newcomer to the nominating process that was good insight for me. Thank you Mary.

In other news, I've been doing some work for Lackington Magazine and enjoying it quite a bit, here's what I created for Rose Lemberg's A City On It's Tentacles published there. More from Lackington's coming next month. 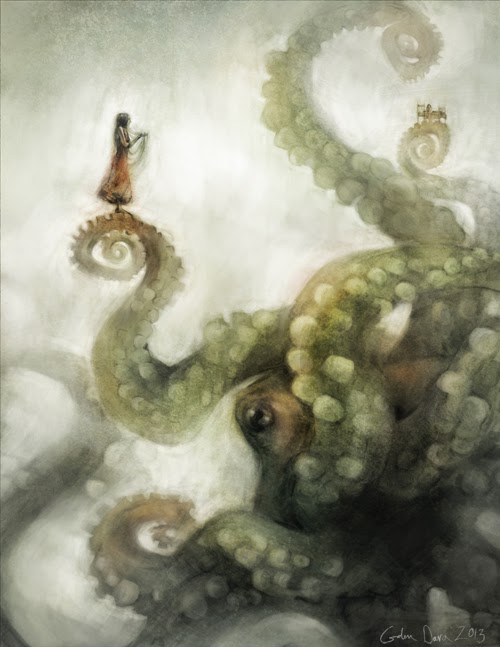 Posted by galen dara at 9:12 AM No comments:

Well since the Hugo ballot went live this past weekend, lots of stuff has been said.

But it's what Jeb Hartman said that is bringing tears to my eyes right now:


"One of the most happily amazing things about this year's ballot, in terms of gender, is the Pro Artist category. Last year, one woman was nominated (Julie Dillon), and she was the first woman to appear on the ballot in that category in twenty-seven years. This year: THREE women.
This is unprecedented in the entire fifty-five-year history of nominations in this category. There was only one previous year when even two women were on the ballot, and that was 1984." ~read more

Before last year only two women had ever been nominated in the Pro Artist category; Rowena Morrill (nominated several times)  and Val Lakey Lindahn. (btw, you really should read Justin Landon's run down of gender parity in  the SF art world.) And now here's us: Julie Dillon was the first woman on the ballot in 27 years. Fiona Staples, technically on the ballot twice because Saga is Nominated for Best Graphic Novel. And me, who made the jump from the Fan artist ballot to the Professional Artist ballot in one year. (Yeah.)

Going back to Jeb, because he just said it so well:


"[The Professional Artist] category is one of the least-changing categories on the ballot; this development seems to me to be a great indicator that things are changing. Though of course a single year does not make a trend. I hope this continues; and I hope that the Pro Artist category continues to recognize a larger number of artists than it usually has over time." ~read more

In that light I want to give a shout out to the four other illustrators working with me on the Women Destroy Science Fiction issue of Lightspeed Magazine:
As well as a random (short!) list of my own favorite artists (who happen to be women) working in the field today:
Because it feel so applicable  here's an excerpt from Kameron Hurley's essay “We Have Always Fought: Challenging the Women, Cattle and Slaves Narrative”:

"And when we talk about war, we talk about soldiers and female soldiers.
Because this is the way we talk, when we talk about history and use the word “soldiers” it immediately erases any women doing the fighting. Which is it comes as no surprise that the folks excavating Viking graves didn’t bother to check whether the graves they dug up were male or female. They were graves swords in them. Swords are for soldiers. Soldiers are men.... Let’s just put it this way: if you think there’s a thing – anything – women didn’t do in the past, you’re wrong. Women – now and then – even made a habit of peeing standing up." ~read more

Speaking of women who fight, here's the illustration I did for Codename Delphi, written by Linda Nagata, published at Lightspeed Magazine, (which is nominated for Hugo in the Best Semiprozine category.) 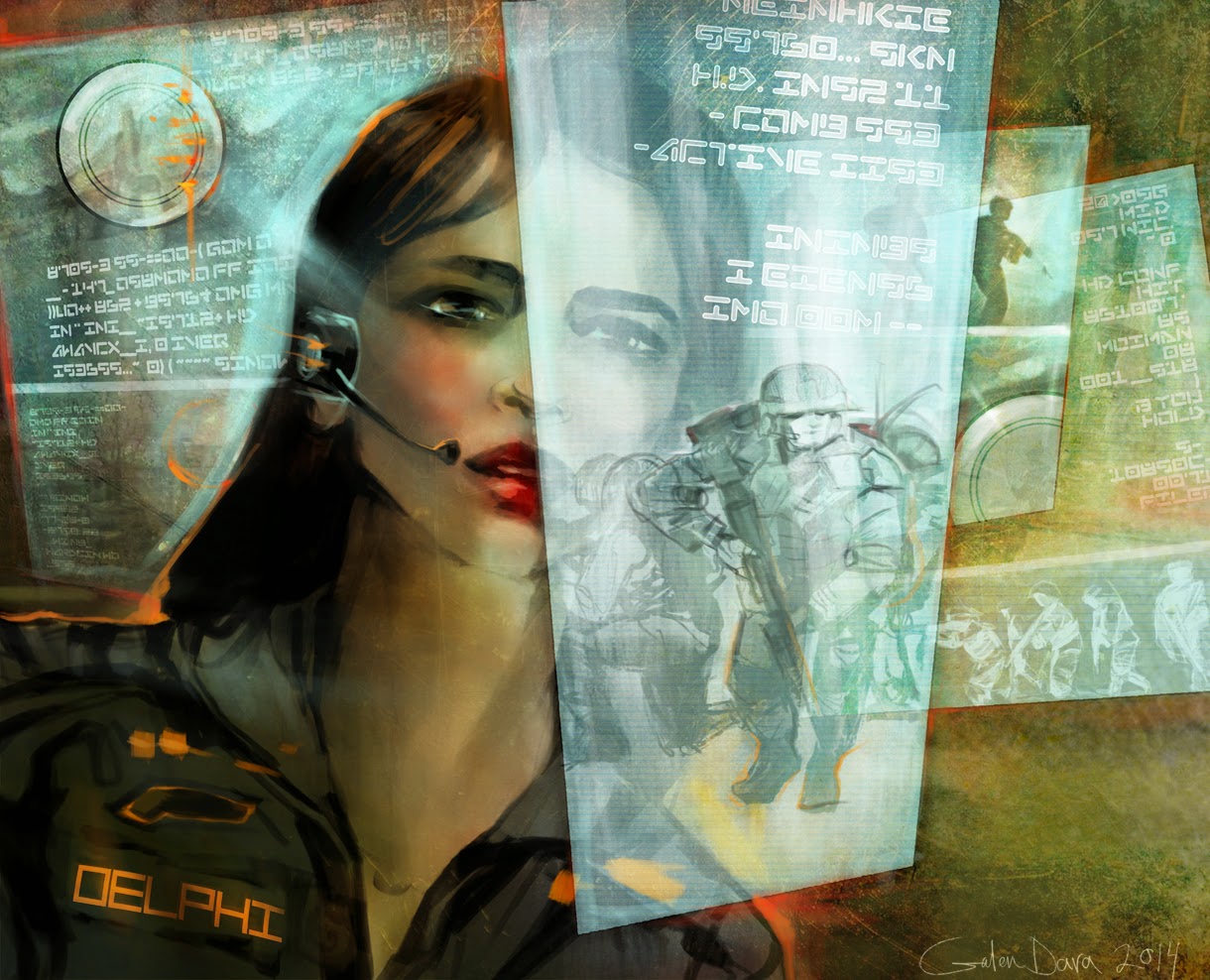 The 2014 Hugo nominees were announced yesterday. And this happened:

So yes, leveling up a bit from last year's win in the Fan Artist category, this year I am on the Hugo ballot for Best Professional Artist. Incredibly honored to be included with Julie Dillon, Daniel Dos Santos, John Harris, John Picacio, and Fiona Staples

(btw... Saga volume 2, which Fiona does the art for, is nominated for Best Graphic Story. I'll definitely be voting for that.)

The ballot is stacked with so many amazing creators including John Joseph Adams for Best Editor, and both Lightspeed magazine AND Apex Magazine for Best Semiprozine. My experience working with them has been a pivotal part of my career. Congratulations and good luck to everyone.

To conclude, I leave you with the the illustration I recently did for Campbell Award Nominee Sofia Samatar's lightspeed story "How To Get Back To The Forest" 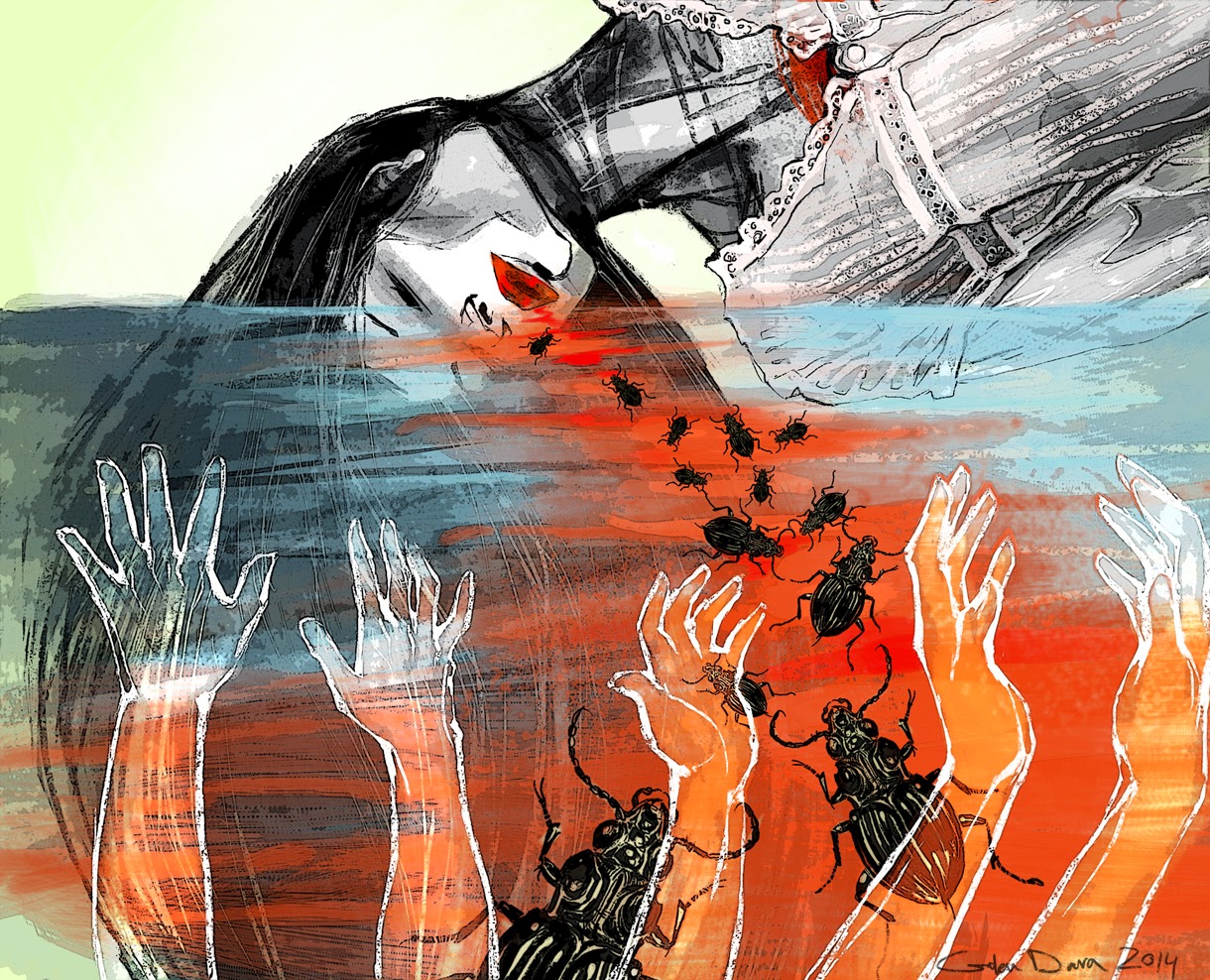 This is very old news now, but hey, one of my Lightspeed Illustrations (the one for Abyssys, Abyssum, Invocat, written by Genevieve Valentine) was accepted into the upcoming Spectrum 21 annual! That makes two years in a row I've been included in the Spectrum collections and I'm feeling quite pleased with that. Congratulations to all the other fabulous artists included.