when you are a fledgling freelance illustrator with a young kid at home. 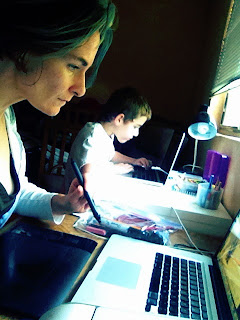 Me, working on my laptop, next to my kid, playing games & doing homework on his laptop.
(anyone got any great suggestions at keeping an 8 yr old entertained while you work? I'm running out of them)
Posted by galen dara at 5:18 PM 3 comments:

This needs to happen more.

Many thanks to Spectrum Fantastic Art Live, the Illustration Masters class, and the Tucson Drawing Studio, for getting me back into it after so very long.
Posted by galen dara at 5:12 PM 2 comments:

Illustration Masters Class. After the Fact.


It's been over a week since I got home from the Illustration Masters Class: took me this long to just catch up on sleep and try to get back into the 'real life' routine.

What a ride that was.
I went to the IMC with some ambivalence over what I wanted to get out of the week. I'd selected Adam-Troy Castro's "Our Human" because the story was profoundly intriguing to me, but found myself struggling to draw the alien characters. I hoped to get experience with creating a graphic novel but the emphasis of the IMC was more for painting than comic art. My initial attempts to take a scene from Our Human and panel it out were very disappointing. What was I thinking anyways? In last minute desperation I came up with a quickly roughed out single image that could be my back up for an illustration piece if the comic idea totally fell through. 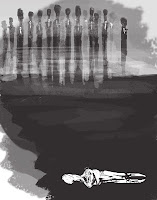 My first Critique session was with Julie Bell, Donato Giacola, and Gerald Brom.  They all completely ignored my pathetic story panel samples and went right for my last minute illustration sketch. To my surprise, they liked it! They were intrigued by the graphic nature of the piece and it's spooky tone, we had a great conversation about ways to deal with the content etc...  WIN.


But I had spent all that time trying to work Our Human into  graphic novel. And even though the emphasis of the week was more on painting, so many of the instructors here had lots of experience in sequential art as well...  (Did I mention I had ambivalence over my goals for the week?)  I was pretty sure I could pull off the single illustration with time to spare, so I decided to get some feedback on my poor little comic panels as well.  There was a few open slots left in a crit session with Irene Gallo, Scott Fischer, and Doug Alexander, I threw my stuffs up on the wall there to see what they'd say. This crew went immediately to my comic pages and Doug walked me through a better panel layout, focusing on content, point of view, visual clues, etc.  ::AWESOME::  I was set. 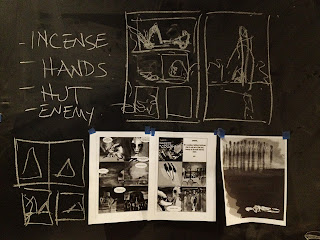 The Our Human single illustration sat untouched on my desktop while I worked over my panels, revisiting the dialogue in the story, working at ways to tailor the written scene into sequential art, getting additional feedback from Dan Dos Santos, Greg Manchess, and Boris Vallejo.

Everyone kept saying "Make sure you talk to Rebecca Guay and Ian McCaig, they really know comics".


So, on the second day I finally caught up with Ian.

The first thing he asked when I showed him my work in progress was:


"Why aren't you turning one of your own stories into a comic?"

That was not what I expected, at all.
"You have story ideas, right?" He asked.  Well sure, don't we all?  But they're just ideas, characters, not fully formed, not ready for THIS. "Of course they're ready, I'll help you" Ian said.  Well wow, how can I say no to that? He sat down with me and I pitched a few of my story ideas to him (which was intimidating, to say the least). Together we picked one and he walked me through the ground work of laying the plot line (more about that later).  After that I scurried back to my laptop, this time to open a word document where I spent until 4:30 am outlining my story. No more aliens. Now I have a young tormented young girl with some difficult genetic traits, who's about to have all her bridges burned. 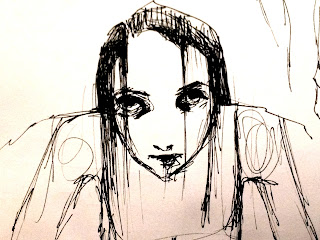 Then I hit a wall. The next morning I was exhausted, struggling to write the story and come up with scenes to panel out, overwhelmed with imagery I wasn't sure I could pull off in the short time remaining. I didn't know what to do. I talked to Brom. I talked to Rebecca. I looked at all the work the other students were doing (so many awesome people there). I took a nap. Then, a bit sheepishly, I put the word document and the new character studies on the back burner and went back to the illustration for Our Human.

Tall eerie aliens against a desolate landscape, standing watch over their waste of an atrocious human...  Oh yes, I love the images in this story.

(It wasn't until after the fact that I saw John Jude Palencar had gone with a similar theme for his illustration of the story. That was a humbling comparison.) 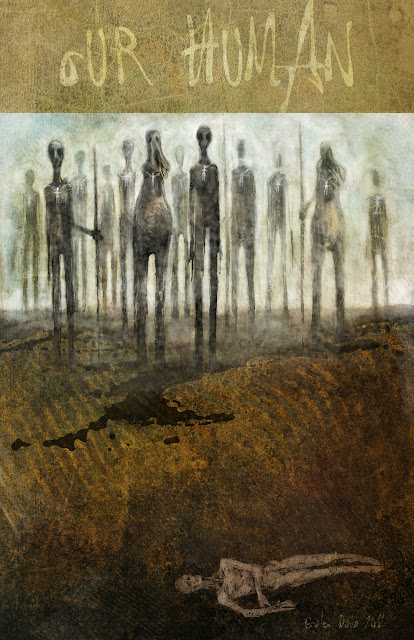 But what was I going to tell Ian when I saw him again? (He had been so excited...)  Also, I really LIKED brushing off that story idea from so long ago and working on it. What do I do with that?

Well, I multi-tasked the rest of the week. Devoting all my official working hours to Our Human, but  keeping that 'other thing' warming on the back burner as the days progressed.  (Doing quick character sketches and thumb-nailing scenes during lectures and down time.)

(Did I mention I didn't sleep much during this week?)


By Wednesday evening, I finished the final for Our Human. So Thursday, the last full work day of IMC, I dived back into the comic. I managed to pull out two sample pages. The story is still very much in the rough stages.  I suck at knowing what to put in those word bubbles. I'm still working through characters studies and setting... But it's a start. And not a bad launch point for exiting IMC; a whole new project to keep working on. Now to finish the story. 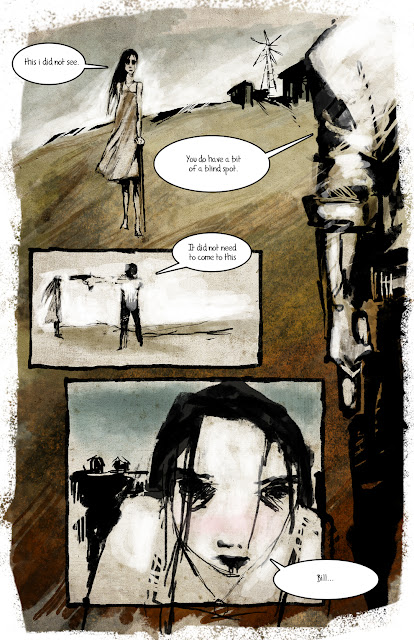 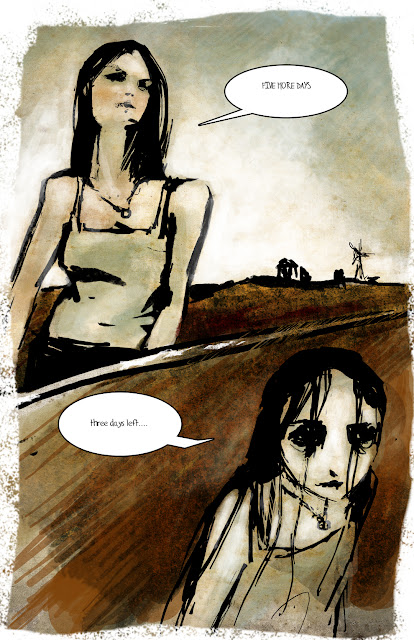 Anyhow, there you go. My IMC experience.  I'm looking forward to next year. (More pics here)

Aliens for IMC. First round of character studies. 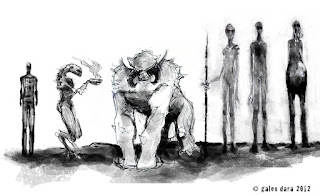 In about a week I'll land in Amherst Campus for the Illustration Masters Class.

Here is my first round of character studies for the various alien races from "Our Human" (images produced by arrangement with the author.) 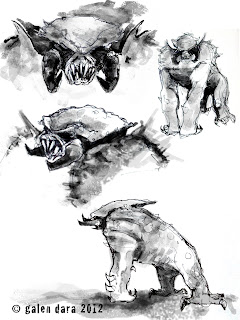 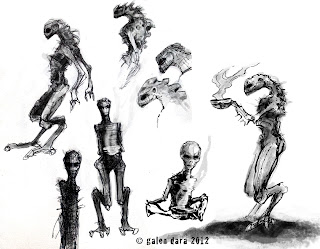 And also: a village full of primitive, mystic, three-gendered aliens: 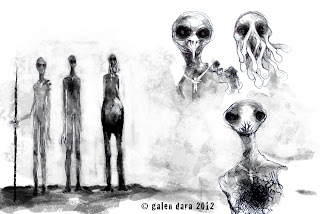 This is me just working out the feel of the various characters. (Any and all feedback is welcome: I found attempting to draw aliens to be unexpectedly difficult.)

Next, I will be doing thumbnails to panel out a scene from the story into a two page comic. I have several scenes in mind, so I'll have to play around a bit to find that one which I'll nail to the wall on that first day in Amherst for the initial critique.


So there you go. #Amdrawing.