getting my hands dirty

Because we just got our assignments for the upcoming Illustration Masters Class.  And while I'll bring my laptop and tablet, I'm going to be spending the week getting my hands dirty with actual pigment suspended in liquid-y mediums (both of the aqueous and oil variety).

HOWEVER.... it's just for kicks.  Because seriously.


Here's some sketchbook dabbling with paint, just working through brustrokes and glazes and color chart type stuff,  because it has been a long time. Thank you Bill Carmen and Rebecca Yanovskaya for being my reference imagery and inspiration.

saw this on io9 the other day.

Posted by galen dara at 7:47 PM No comments:

'A Girl Who Comes Out of a Chamber at Regular Intervals'

Lacktington Magazine issue 2 just landed (and is available for purchase), including "A Girl Who Comes Out of a Chamber at Regular Intervals" written by Campbell Award Nominee Sofia Samatar and illustrated by me:
I first illustrated one of Sofia's stories over at Lightspeed: "How To Get Back to the Forest" and, incidentally,  Sofia is on the line-up for Fireside Magazine year three, which means I'll get yet another chance to work with this amazing woman's storytelling.

I am utterly, fabulously, delighted.
Posted by galen dara at 8:00 AM No comments:

Well, Spectrum Fantastic Art Live 3 was just the thing. No booth for me this time, I wanted the freedom to wander about about, absorbing the awesome. Which meant I came home with a lot more art this time (heheh, /WINCE). From right to left, top to bottom: Rebecca Yanovskaya, Garrett Johnson, Cynthia Sheppard, Annie Stegg (twice), Steve Argyle, Sara Richard (twice) and Wendy Martin:


Also I came home with sketchbooks from John Picacio and Bill Carmen (!!!) with WIP glimpses, notes and a little insight into all the crazy stuff that happens inside an aritst head. I'll be spending the next weeks swimming through those. 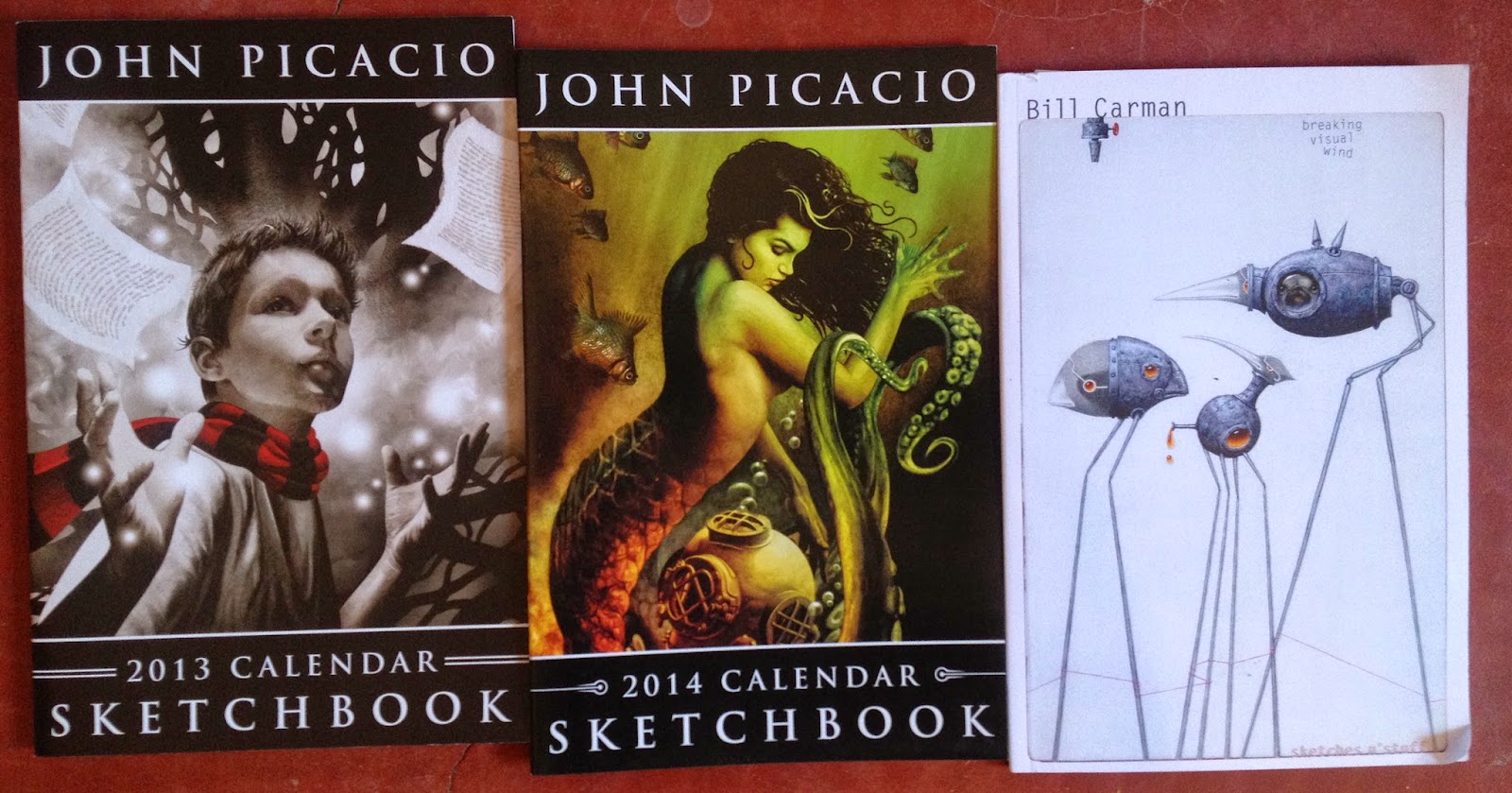 Speaking of.. here's some of what I sketched while inflight between Tucson and Kansas City:

It was just all incredibly... fantastic. Three more artists I have to make note of: Shelby Nichols with her lovely creepy darkness, Britt Snyder with his lush, buttery brush strokes, and Dan Chudzinski for his OMFG brain and bone-filled cabinet of curiosities.

One last thing: Chavant clay. Because they were handing out samples in the 3d area (where all the demo sculptors were making awesome with it). And I spent the whole flight home mushing and molding it. I need to get me some more of that.

the Women Destroy Science Fiction issue of Lightspeed magazine is now available for pre-order. Here is a look at the table of contents (this issue is a veritable TOME of freaking awesome females.)
Aaaaand... here's a look at the cover I painted for it:


For this one I got in touch with my pulpy sf side (didn't even know I had one) and started handing out bazookas. It was pretty different from basically anything I've done before and it was incredibly fun. Thank you Christie Yant, Wendy Wagner and John Joseph Adams for letting me have my little part of destroying Science Fiction!

Stay Tuned: Women Destroy Fantasy and Women Destroy Horror are coming up
(and, apparently, Queers will be destroying SF next year OMG SQUEEEEE)

Posted by galen dara at 4:26 PM No comments:

Also, a friend shared this article the other day, about putting away the camera phone and learning to draw:


"...because drawing can teach us to see: to notice properly rather than gaze absentmindedly. In the process of recreating with our own hand what lies before our eyes, we naturally move from a position of observing beauty in a loose way to one where we acquire a deep understanding of its parts." ~read more

I am working on various illustrations pretty much every day. But I've thought about setting a goal to incorporate pure drawing practice every day. For the fine-tuning of it. For the joy of getting immersed in details. So here, this morning I set the timer for an hour and just put pencil to paper (using photo reference, because I'm swooning over all the lovely layers of fabric.)

Making It, Locus Awards, plus other stuff

Heading off to Spectrum Fantastic Art Live this weekend and I'm really really looking forward to so many things, one of them being the Documentary Making It, about, well, making it as an illustrator.

Then they posted their promo photo and here's what Irene Gallo noticed about it:


(A lot of really great comments on that FB thread, including mention of a lot of great women and people of color who are "making it" as successful illustrators.)

Anyhooo... Then a few hours later the Locus Awards Finalists were announced and Congrats to all the nominees! It's a wonderful line up.

But there is this:

Dear Locus Award nominators: It’s been nine years since a female human was in the top five for Best Artist. This is, you know, nuts.
— P Nielsen Hayden (@pnh) May 8, 2014


Which led Julie Dillon to spontaneously tweet a list of 14 amazing women who happen to be illustrators (she did, after all, dedicate a tumbler to the issue.)

Actually... just for my own purposes (and since it's been quite the topic today), here's Julie's tweeted list, with links:

(And that's just scratching the surface. Just today at Tor.com new fiction went up with an illustration by Anna & Elena Balbusso. I love it when that happens. )

It's hard to know how to make note of this all and not have it come off as seeming negative about the incredible artists that are in that promo photo line-up for Making It (Andrew Bawidamann, Brian Ewing, Eric Fortune,Woodrow J. Hinton III, etc)  and nominated for the Locus Awards (Bob Eggleton, John Picacio, Shaun Tan, Charles Vess, and Michael Whelan.) They are brilliant amazing artists. It's just one of those things. That's all.

Well, I'll leave it at that. Except that I'm happy because issue 13 of Fireside Fiction went up today, including the illustration I did for Jonas David's 'Repossession', and because next week a new story by Sofia Samatar is going live over at Lackingtons, which I also got to illustrate.

Posted by galen dara at 9:49 PM No comments:

Did i mention that War Stories will have interior art :) 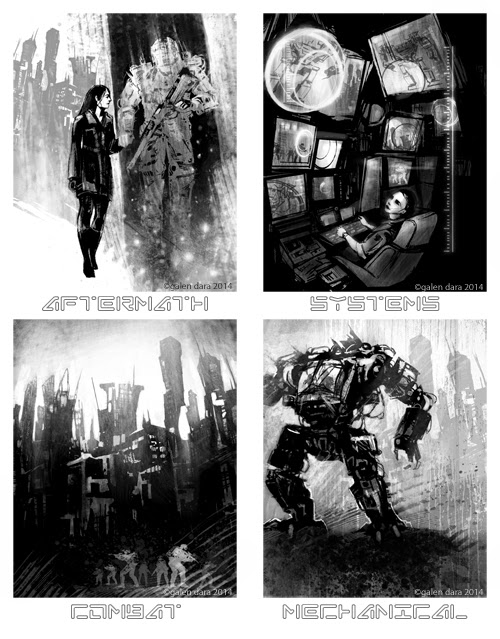 When I showed them to Jaym Gates she said "They look like panes from gorgeous graphic novels" which just delights me no end. (And makes me want to play around with sequential art again.)
Posted by galen dara at 9:29 AM No comments: