voices in my head (or whatever)

Apropos of nothing except that my isolated at-home working process usually requires me to have some sort of white noise on in the back ground so I do not go stark raving mad, I've recently queued up TED talks on my ipod to listen to while I work (in regular rotation with varoius TV shows, news,  a variety of music, podcasts, or audio books,)

These two just have me head over heels so I just had to share.

Sarah Jones holds all the voices in her head


love them. both very very much.
Okay, back to work.
(and here's a sneak peak at what that looks like:) 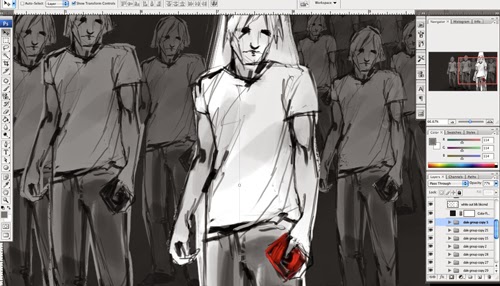 Posted by galen dara at 9:21 AM No comments:

So, as I'm wont to do,  I went to IMC with several sketches to stare at (and ambitions of finishing all of them). 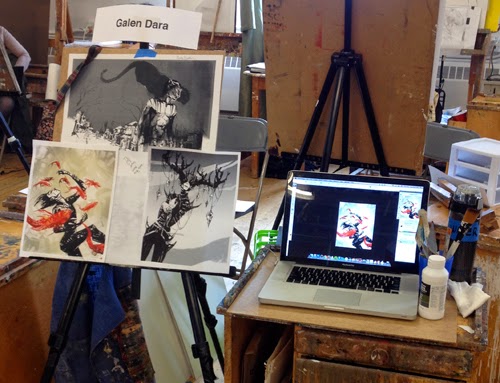 (* for some reason, blogger is putting a greenish cast on these images... here is a more accurate reproduction of the art's color.)


Swooning and surrounded by flying red fish. Are the fish being juggled?? Is the figure flying in their slipstream? Dancing with them?  When I took this one to IMC it was with the thought of shoehorning it into the "Dragon Rider" assignment. A bit of an interpretive leap, but I liked the image and wanted to make something of it. Back to calling them fish now, not dragons. But, anyways.

Here, putting this one together, from start to finish, a few in-progress shots: 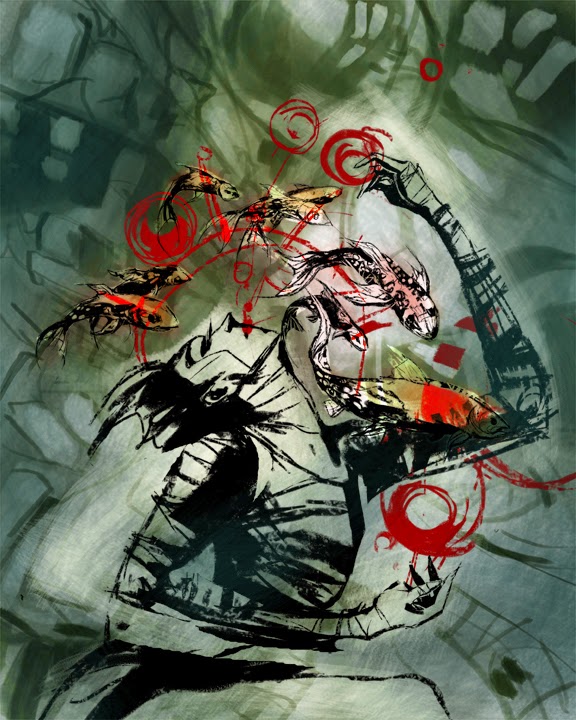 The first rough sketch was a wild experiment, where I really stretched the human figure, extreme elongated distorted limbs. And rough slashing away with red marks. The fish were almost an after thought in this preliminary sketch. 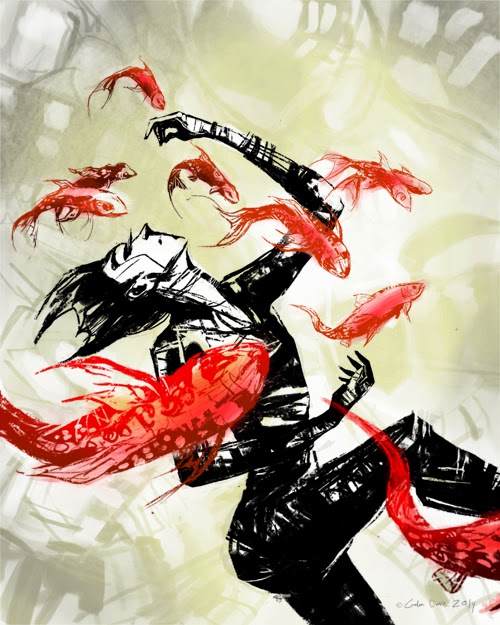 Then I began to rein in the figure, getting it a bit more under control, removing the random red slashes and incorporating the fish as the red emblems instead. 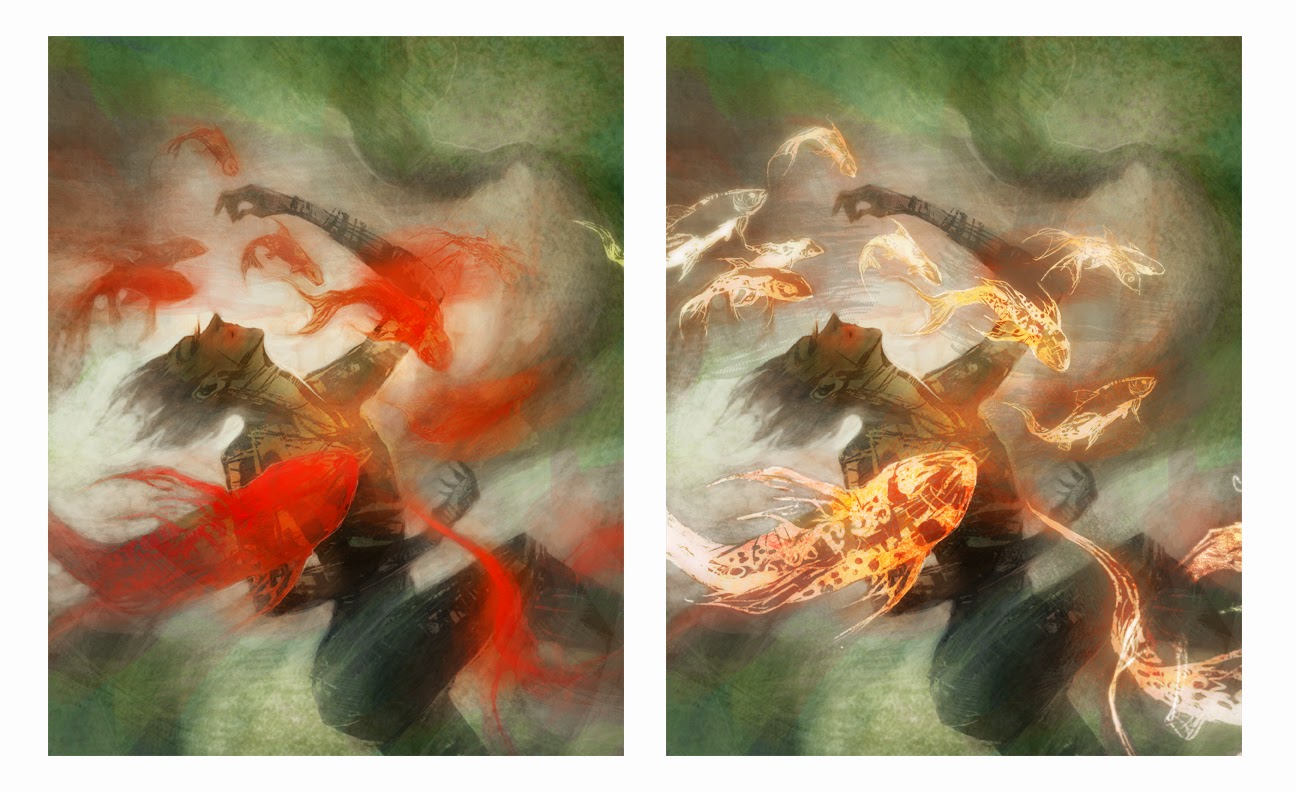 In the middle of the painting process there was a point where I thought about toning down the red and making the fish golden instead. But during IMC Rebecca Guay did a demo painting in which she incorporated red fish in a figure's hair. It was just so perfect and I love red so much, that's where I finally took it.

The final painting will be used by Rose Lemberg for an upcoming anthology she is editing, An Alphabet of Embers.

Posted by galen dara at 6:33 PM No comments:

awesome IMC insecurity, inspiration and such and such

The other day, Jon Schindehette wrote a post about art envy, insecurity, and comparisons.  An excerpt:

"About half way through the the Drink & Draw I had a really authentic conversation with one of the better artists at the event…and guess what he was worried about - folks looking at his sketches and judging him for it. That suddenly put my entire life in perspective. I realized that it didn’t matter how good I got, how secure I was in the knowledge of my skills - I would always look at artists that I admire and compare myself to them....

There is nothing wrong with wanting to do better things - to be a better person, but it is an issue when we are comparing our insides with someone else’s outsides." ~read more


It feels fitting to lead off talking about Illustration Masters Class 2014 with that, because, dammit, feeling insecure about my work that was the story of my life for the whole week. And you know what made it a tad bit more bearable?  Hearing Mike Mignola mention his own insecurities as an artist. So, Yes, thank you to all the incredible artists there at IMC (both faculty and students) for being BRILLIANT and supportive, and also for being vunlerable.


My preliminary sketch; this week I wanted to take something I had worked out digitally, and try my hand at traditional mediums: Here's my preliminary digital sketch (was calling this my attempt at the "fairy warrior" assignment)
So it begins:


Meanwhile... some of who did what where:


Then, back to what I'm attempting:


After multiple variations and methods and experimentation (and frustrations with trying to revive old paint handling muscle memory) here's what came of it.

Well, and also, I was able to grab Rebecca Guay, Julie Bell, Irene Gallo, Zoe Robinson, and Lauren Panepinto and host a spontaneous recorded discussion. It was a brilliant brain trust and the conversation was amazing. More coming about that soon. (Hint: WOMEN DESTROY FANTASY. Hell yes.)

What was waiting for me when I got back from the Illustration Masters Class:

It's a hefty tome of awesome and you can get it in paperback here, or ebook here.

It happens to include the work of four other artists who it was my delight to work with. Li Grabensetter, Elizabeth Leggett, Christine Mitzuk, and Hillary Pearlman.

Now, an excerpt from my interview with them:


"...it feels timely, and personally fitting, that this would be the summer Lightspeed dedicates an entire issue to the enormously talented and fantastically imaginative women working in the field of speculative fiction. The opportunity for me to invite other artists to be a part of the project was nothing short of breathtaking. Li Grabensetter with her beautiful handling of inks and watercolors, Elizabeth Leggett with her brilliant digital renderings, Christine Mitzuk’s rich painterly style, and Hillary Pearlman’s fantastical tinkering bring the fiction in this issue depth and texture. It was a pleasure to work with these gifted and passionate artists who are deeply involved in the speculative fiction community. My favorite part of working on this issue was sitting back and watching their amazing art come in. My second favorite part was getting to know these fantastic creators just a little bit better. I hope you enjoy this spotlight on why each of them does what they do. Which, apparently, is to destroy Science Fiction." ~read more

And here, a sampling of what they did for this issue of Lightspeed:

Li Grabensetter's illustration for Each to Each, written by Seanan McGuire: 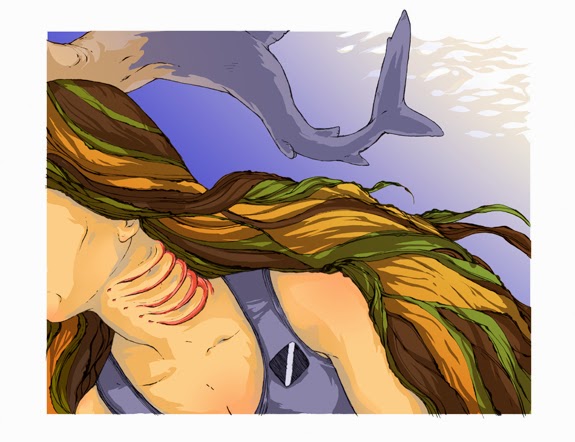 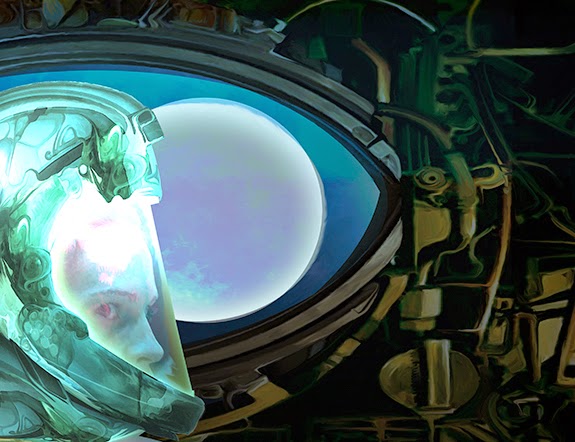 Christine Mitzuk's illustration for The Case of the Passionless Bees, written by Rhonda Eikamp : 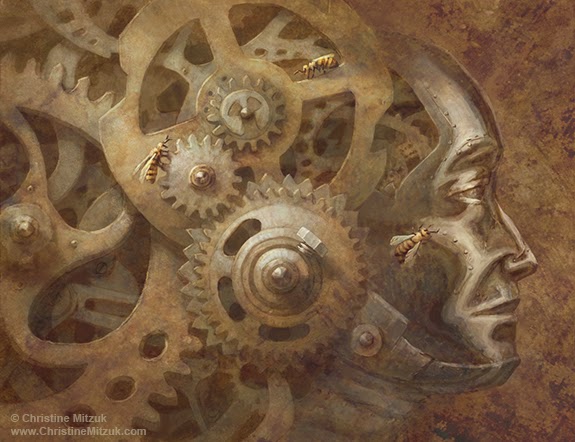 And Hillary Pearlman's illustration for Walking Awake, by N.K. Jemisin: 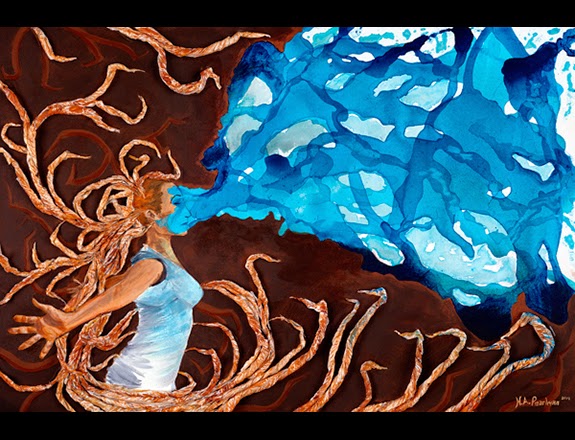 It was a pleasure to be involved with this project, many thanks to Christie Yant for her hard work in bringing this epic volume to life.   Stay Tuned, more exciting things coming with Women Destroy Fantasy and Women Destroy Horror.

Finally getting my feet back under me after a week in Amherst for the Illustration Masters Class. (More about that later.)  While I was gone, D.B. Starler's piece Good Ghoul Gone Bad went up at Fireside Fiction Co.

Here's my illustration for it:
For his one I grabbed my kid's nerf gun and acted all badass to get some photo reference. Here's what that looks like:
Speaking of photo reference, here's a few that Annalisa Schaeffer took of me for her piece while at the Illustration Masters Class (here's her illustration in progress). I will always jump at the chance to put on leather gauntlets, grab a rapier, and dangle from a banister. 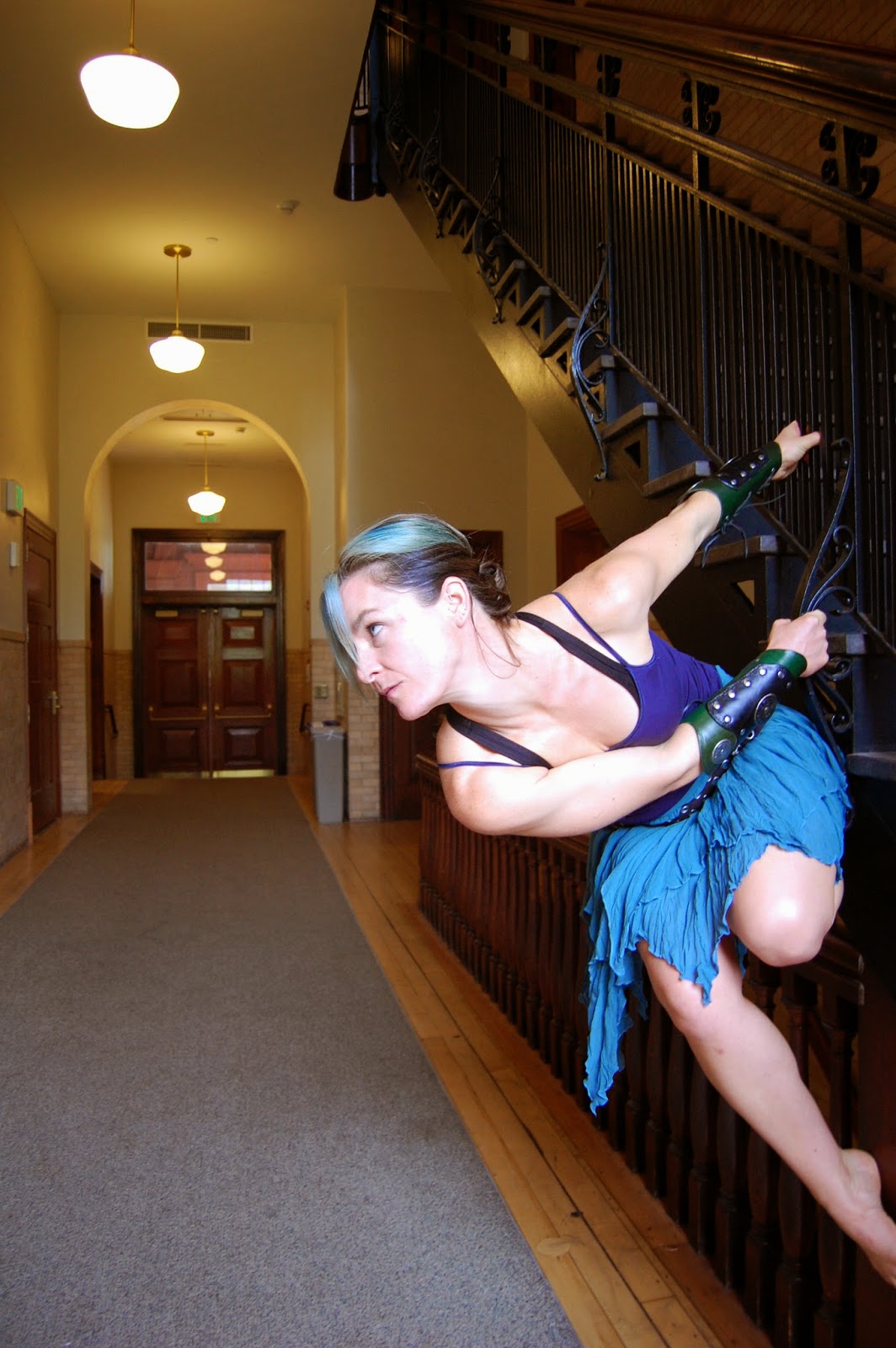 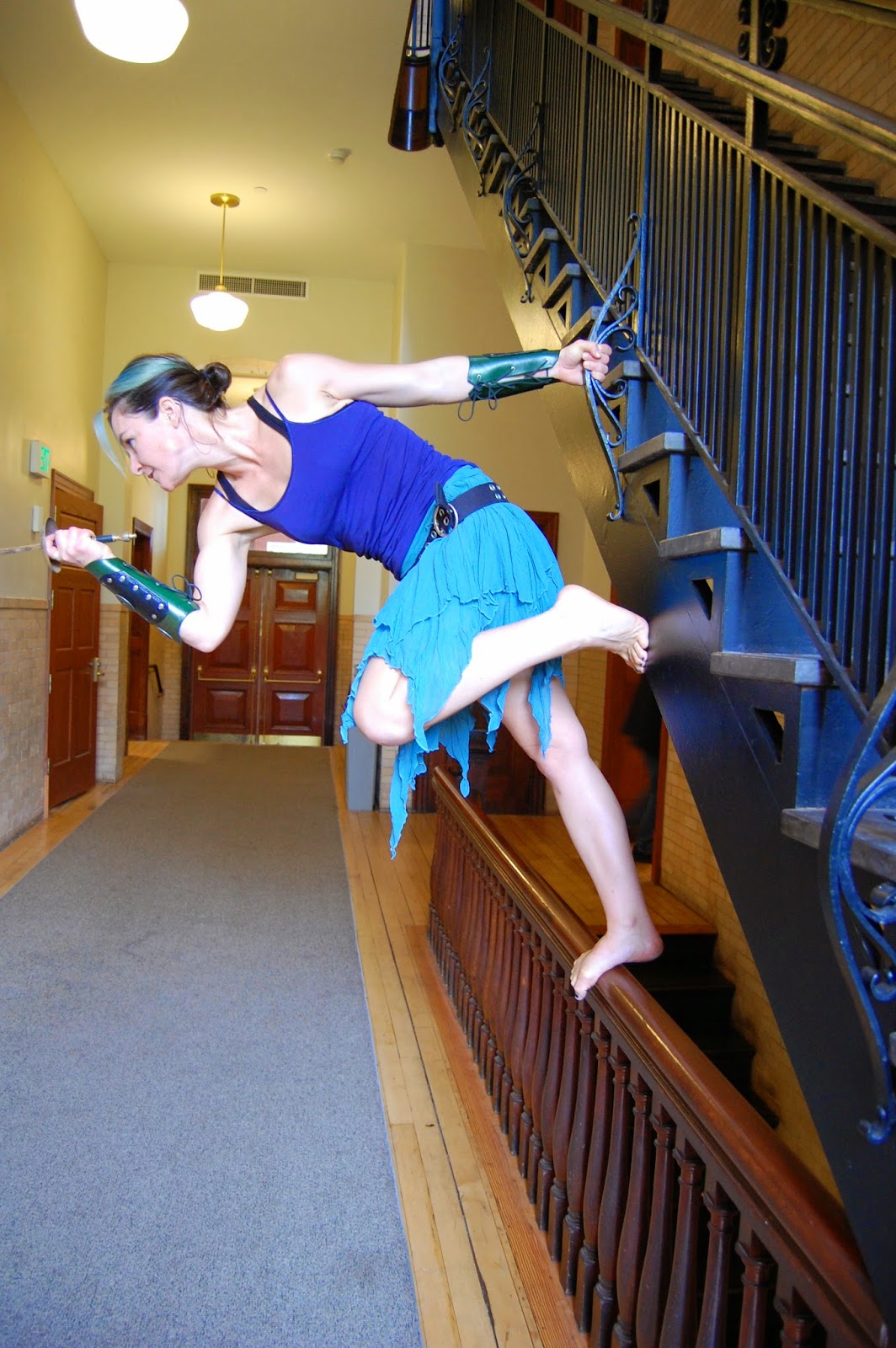 Thank you, D.B. Starler for writing an awesome story in which I got to play with nerf guns and draw tentacles, and thank you Annalisa Schaeffer for letting me get in touch with my inner fairy warrior.

Okay, enough about that. Back to work.
Posted by galen dara at 10:33 AM No comments: