My latest Art Nerd post is a bit of a fan girl squee because BATWOMAN IS TEAMING UP WITH WONDERWOMAN!!! And artist J. H. Williams is fabulous.

Artist J.H. Williams, who came to Batwoman in 2009 with Greg Rucka, has a whole flickr set dedicated to his work with Kate Kane donning the cowl and gives this glimpse into how he created the cover for #13 (with grievances about the final design decisions.). In addition, he has this to say about artistic considerations for working with these two major icons in one storyline:


“We’re super excited to be tackling Wonder Woman for a bit in the upcoming arc of ‘Batwoman, but also feel a sense of trepidation and responsibility, with her probably being the most iconic female hero of all time in comics. We needed to approach her with reverence and respect. And also wanted to give her a sense of purity in how she is drawn, something clear in her appearance, overt and forward. Now doing this, and then setting her next to Batwoman produces fascinating juxtapositions of their styles and nature of their characters. Batwoman being shadowy and a bit withdrawn, Wonder Woman being bold and vibrant. They do have things in common with their sense of purpose, but yet also things that make them quite different from each other, and them coming together brings out complimentary aspects much in the same way Batman and Superman do for each other as characters. The result is a compelling union of two iconic women that bring balance to how they can be perceived.” ~J.H. Williams, via Comic Book Resources.

So this issue is SITTING RIGHT HERE BESIDE ME but I haven't had time yet to do more than thumb through it and drool just a bit. Mostly, I love that on the first page Kate heartbreaks just a tiny bit over Diana.  More later.  Here's a preview.

Posted by galen dara at 9:08 AM No comments:

rushed and talentless (plus misc)

Ha! Just kidding with the title. Well, only sort of: it sums up the two thoughts on my mind right now.

First, in Episode 44 of 3chicks review comics, Kelly Thompson talked about Catwoman #0 with art by Adriana Melo and commented that the art is just not very good and maybe was that there was a time crunch to get the issue out so she was rushed and not able to perform to her usual standard. (The cover of that issue by Guillem March had already raised a ruckus previous to hitting the shelves.)  Catwoman #0 is in a stack somewhere here on my desk, I just haven't had a chance to open it and make my own opinion. But rushing to get stuff done is something I'm have a love-hate relationship with.

"...There’s no evidence that talent actually exists. Nothing in the DNA studies points to some mysterious gene that can be identified as a talent for art, photography, painting, basketball, pinball, running, medicine, etc. Talent is built, not possessed. If it’s in the epigenetic material, it would’ve been there since the dawn of man. Clearly, Cro-Magnon man did not have a gene for ping pong.... Loads of creative people believe they have a gift for what they do. Frankly, they just have a poor memory for remembering that when they were young, they were training themselves to learn. I’ve followed quite a number of great creative people who will simply tell you they have no talent, never did, and had to work their arses off to get to where they are. Trust those guys." ~read more


And now the misc: I have a new Art Nerd post about starting my own pull list at my comic shop including Saga and Captain Marvel:


"Admission: I’ve never bought weeklies at a comic store before. (Was always intimidated about plunging into the middle of a story line and getting lost in some crossover.) But when I heard about two new and intriguing comic series coming out I jumped at the chance to get in on the action from the beginning. First, over at Image comics, Brian K. Vaughan has teamed up with Fiona Staples to create Saga, an epic sci fi/fantasy for mature audiences that tells the story of Alana and Marco, new parents on the run from authorities in a galactic war.  Then in the Marvel Universe Kelly Sue Deconnick is writing a brand new story arc for Ms Marvel, now as Captain Marvel! (Art by Dexter Soy.) Two vastly different comics both of which I’m enjoying immensely so thought I’d share with the FN crowd." ~read more

On that note, a few more things I've added to my pull list: Batwoman, Stumptown, and Transfusions. In addition, Captain Marvel is now being drawn by Emma Rios, which I am quite enjoying. Plus I just got my hands on the 5 issue run of Caitlin Kiernan's Alabaster Wolves, which I got mostly for the cover art by Greg Ruth and ended up loving the story and interior art as well.

Alright, that's all for now. Back to work.

Posted by galen dara at 9:41 AM No comments:

stuff on my mind right now.

One of my IMC friends, Marc Scheff, put this together the other day. It's been on my mind a lot lately. (Here's the high res version on his website.)

I spend a good amount of time "drawing" right now. But not so much just doing the studies and sketching I used to. I need to fix that.

Meanwhile.... I need to do something about my computer, cuz I get this problem almost every day now :-/ 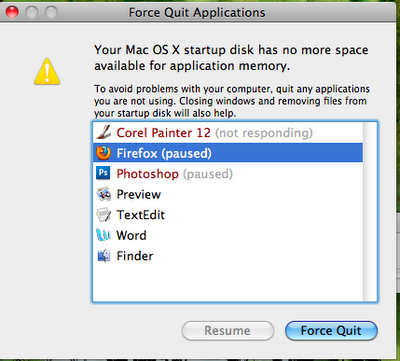 Posted by galen dara at 3:25 PM No comments: